Happy Brain, Happy Gut ! How does it work? The brain and the gut communicate via gut-brain axis, a mode of bidirectional signaling between the digestive tract and the nervous system. There are several central mechanisms by which gut bacteria can communicate with the brain. First, imbalances in gut bacteria can trigger inflammation by increasing the permeability of the intestinal lining, which allows toxins to seep into the bloodstream. Research has linked pro-inflammatory markers (cytokines) and increased intestinal permeability with anxiety and depression. Secondly, bacteria can produce neurotransmitters, which are carried through the blood to the brain. Bacteria can also stimulate specific nerves in the gut that then transmit information to the brain. Fortunately, you can support gut health (and therefore mental health) by eating a diet that's rich in probiotics -- the "friendly" gut bacteria that support digestion and a balanced microbiome, and are known to boost immune and neurological function.

The Gut-Brain-Body Dance – Healing the Impact of Stress & Trauma

The brain, by definition, is an organ of infinite complexity and staggering dimensions. The number of neurons, the basic cell that controls all information processing, is in the range of 100 billion. These neurons are connected to nearby neurons by dendrites, multiple tiny short wires. Neurons are connected to distant brain sites by axons, long wires insulated by fatty substance called myelin. The number of dendrite and axon connections is in the range of 100 million billion! And the organization of the brain is so complex. The resilient body, through its complex systems of measuring messages from the environment, informs the brain of what's going on. It sages from the environment, informs the brain of what's going on. It does so through signals from the primary sense organs of the head and neck, and from the skin, muscles, tendons, and ligaments of the somatic body. These messages from the body will alter the brain, as the intricate interplay between brain and body creates learned movements and skills for the body to carry out. The brain and body are involved in an elegant dance, ever changing and growing, developing body skills and promoting increasingly more complex neural connections. On the flip side, stress and traumatic emotional experiences can alter the brain as well, injuring it and impairing its function. Stress and trauma do damage to the brain - damage that can be seen on an fMRI. Severe negative life experiences cause loss of neurons specifically in the memory centers of the brain. The infant who does not experience the closeness of the maternal-infant bond suffers shrinkage of a crucial area in the right front of the brain that provides regulation for the emotional brain and autonomic nervous system. The good news is that effective therapy in such individuals can not only improve and correct the symptoms but also promote physical healing of earlier damage to brain regions.

The gut-brain axis (GBA) consists of bidirectional communication between the central and the enteric nervous system, linking emotional and cognitive centers of the brain with peripheral intestinal functions. Recent advances in research have described the importance of gut microbiota in influencing these interactions. This interaction between microbiota and GBA appears to be bidirectional, namely through signaling from gut-microbiota to brain and from brain to gut-microbiota by means of neural, endocrine, immune, and humoral links. At Life Change Health Institute we offer a number of comprehensive scientifically validated holistic programs to address this crosstalk between Gut, Brain & Body.

Trauma , The Gut and the Nervous System

Exposure to extreme threat, particularly early in life, combined with a lack of adequate caregiving responses significantly affect the long-term capacity of the human organism to modulate the response of the sympathetic and parasympathetic nervous systems in response to subsequent stress. The sympathetic nervous system (SNS) is primarily geared to mobilization by preparing the body for action by increasing cardiac output, stimulating sweat glands, and by inhibiting the gastrointestinal tract. Since the SNS has long been associated with emotion, a great deal of work on the role of the SNS has been collected to identify autonomic “signatures” of specific affective states. Overall, increased adrenergic activity is found in about two-thirds of traumatized children and adults. The parasympathetic branch of the ANS not only influences HR independently of the sympathetic branch, but makes a greater contribution to HR, including resting HR. Vagal fibers originating in the brainstem affect emotional and behavioral responses to stress by inhibiting sympathetic influence to the sinoatrial node and promoting rapid decreases in metabolic output that enable almost instantaneous shifts in behavioral state. The parasympathetic system consists of two branches: the ventral vagal complex (VVC) and the dorsal vagal complex (DVC) systems. The DVC is primarily associated with digestive, taste, and hypoxic responses in mammals. The DVC contributes to pathophysiological conditions including the formation of ulcers via excess gastric secretion and colitis. In contrast, the VVC has the primary control of supradiaphragmatic visceral organs including the larynx, pharynx, bronchi, esophagus, and heart. The VVC inhibits the mobilization of the SNS, enabling rapid engagement and disengagement in the environment.

The Dorsal Vagal State and manifestation of autoimmune disorders

People who are in the dorsal vagal state a lot which is the state when the amygdala is activated due to a detection of a slight threat in the environment consciously or unconsciously through neuroception and the traumatized person goes into a state of learned helplessness or what is called dissociation or freeze response which is an unconscious conditioned fear response, the body’s reflex to an internal or external stimuli from a cue of an original trauma. This will activate all the viscera, your heart, your lungs, your colon, your stomach, all of these are run unconsciously by the dorsal vagal nucleus and if you have syndromes where you are in the freeze response a lot, the dorsal vagal nucleus will be hyperactive and you will get syndromes of hyperactivity within the viscera and that can be characterized by Irritable bowel disease, colitis and other autoimmune diseases.

These are cyclical diseases which means they oscillate between sympathetic and parasympathetic nervous system meaning the symptoms come and go which is why the medical profession very often can not diagnose the problem or refer to it as psychosomatic meaning it is a condition of the mind when in fact it is actually emotionally driven physiological conditions of the gut and the brain. Problems with the gut are common with people who have had trauma, it is the physiology of trauma that drives these conditions and so if you heal the trauma you can heal the disease. These conditions are also referred to as neurosomatic, which means they are brain based conditions, physical conditions caused by abnormal function of the brain.

The Amygdala is the agent of fear conditioning, it stores emotionally based memory positive and negative, it is also the gate keeper for responding to threat by activating the fight or flight response, when the fight or flight response is not successful, such as you can not escape the traumatic event, the body goes into a freeze response. The freeze response is predicated by the effects of early childhood experiences, the freeze response is also called dissociation. When dissociation happens you are dysregulated, Dissociation is based a lot on what happened in childhood that allowed you to develop the brain in a way to prevent that from happening too easy. This has to do with Allan Schore’s work on attunement, the part of the brain that controls this regulation of autonomic nervous system and emotional system, which is the orbital frontal cortex. This develops in a healthy attuned infant and shrinks in a neglected infant. We need a developed orbital frontal cortex to regulate us over our lifetime and prevent us from going into freeze states and dysregulation. Helplessness is the essential ingredient for the freeze response. The freeze response is a motor action, which perpetuates the escape behaviour in a way that erases all the procedural (Implicit) memory of that trauma. If you have a threat and don’t discharge the freeze response, you are conditioned thereafter to any body cues related to that traumatic event.The vagus nerve also detects inflammation or infection in the body and relays signals from the brain stem along its southbound fibers. This signal prompts other nerves to release norepinephrine, which makes immune T cells in the spleen release the chemical acetylcholine to depress inflammation via macrophages. 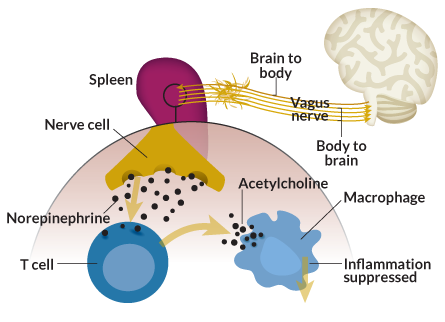